Pour Margaret From Picasso with Love

The story of a Friendship

Some 40 years ago, shortly before she died, Margaret Silberman wrote a memoir about her 16-year platonic friendship with Picasso. She based it on the numerous gifts Picasso had given her as testimony of his affection and on her notes of the memorable occasions on which they were given. She also wrote a short essay on Mme Jacqueline Picasso, who had become her close friend and who, at the time, was not widely appreciated for her outstanding qualities and virtues, as she was to become later. The memoir was never published – until now – and many of the gifts illustrated in it have never been seen publicly before.

In 1961, at Jacqueline and Pablo Picasso’s suggestion, Margaret Silberman opened a gallery in New York called Picasso Arts. She had met Picasso eight years before and visited him periodically for the rest of her life. In 1969, shortly before her death, she assembled the notes she had made on her various visits, each of which had been marked by a gift from Picasso. Some were hardly more than a doodle, others elaborately finished drawings or ceramics. Her vivid recollections of the circumstances surrounding each occasion form the substance of this memoir, chronicling in a uniquely touching way the growth and deepening of an affectionate friendship. 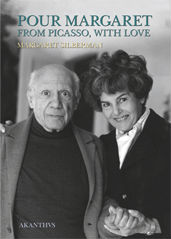